Do you want to communicate in a more environmentally friendly way? It's not only the content of a message that can show your ecological commitment, the channel can also make a difference! Find out why SMS is the least polluting communication channel and how it compares to e-mails or paper leaflets. 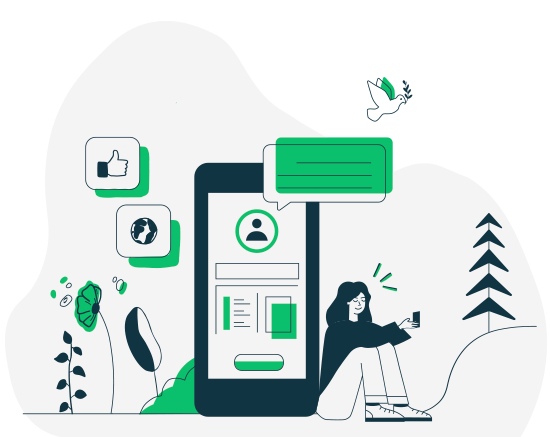 Eco-communication: a challenge for all

Why do our digital communications emitCO2?

Making SMS an "eco-responsible" asset for your company

Eco-communication: a challenge for all

The question of our impact on the planet is becoming increasingly important. And while it is easy to imagine the pollution caused by our travels or our waste, it is less obvious to quantify the greenhouse gases emitted by our digital habits. Yet digital technology is responsible for 4% of globalCO2 emissions and its share could double by 2025. By comparison, this is twice the emissions generated by aviation (which is 2%). In view of these figures, each of our actions can be questioned, and the resources committed to digital marketing are no exception.

As a result, when planning a marketing campaign, the question arises: "Does my campaign pollute?

Many people have looked into the matter, and the results are unanimous: of all the means of communication, the SMS produces the leastCO2!

Why do our digital communications emitCO2?

Digital pollution comes mainly from the use of the internet data flow. The exchange of data stored on servers, in data centres, which are then consulted by smartphones, PCs or tablets. At each stage of this process, energy is consumed andCO2 is emitted.

With SMS, there are fewer intermediaries and less data. The frequencies and network of conventional telephony are used, so that the route is more direct between the sender and the recipient. The consumption is therefore almost reduced to the energy needed to power the devices. Another ecological advantage is that the SMS is received on a mobile phone rather than on a computer, which reduces the energy required to power the device.

We owe most of these calculations to Mike Berners-Lee, researcher at Lancaster University and author of the book "How bad are bananas? The carbon footprint of everything" (also the brother of one of the inventors of the Web, Tim Berners-Lee). 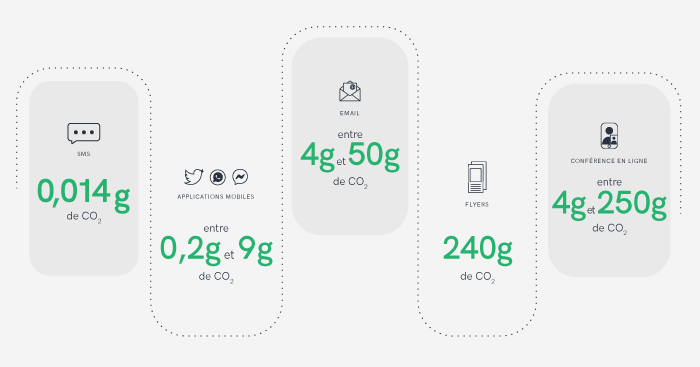 According to the data he collected, e-mails are the most polluting type of message.

The carbon emissions of an e-mail vary according to its content: from 0.3 g ofCO2 for a spam e-mail to 4 g of CO2 for a standard e-mail and up to 50 g of CO2 for an e-mail containing a photo or a large attachment. Moreover, these figures were calculated by Berners-Lee ten years ago. Charlotte Freitag, one of the experts from the company founded by Berners-Lee (Small World Consulting), believes that the impact of sending e-mails has probably increased since then, because the content of e-mails has changed. The number of e-mails has also exploded: every day, 288 billion are sent worldwide and 80% of them are never opened.

A tweet is estimated to have a 0.2gCO2 footprint (Twitter has never confirmed or denied this figure), while sending a message via a messaging app such as WhatsApp or Facebook Messenger is estimated to be only slightly less polluting than sending an email. Again, this depends on the content being sent: gifs, emojis and images have a larger footprint than plain text.

Sending an SMS is by far the most ecological alternative, as each text message generates only 0.014 g ofCO2. Others, such as Frédéric Bordage of GreenIt.fr, even estimate that an SMS emits 0.00215 g ofCO2 (calculation based on data provided by Vodafone).

The carbon footprint of a one-minute phone call on a mobile phone is slightly higher than that of sending a text message, but the carbon footprint of internet video calls is astronomical. A 2012 study by the University of New South Wales (Sydney) estimated that a 5-hour video conference meeting between participants from different countries produced between 4 kg and 215 kg ofCO2.

And what about printed advertising?

Mike Berners-Lee estimates that an advertisement sent by post is responsible for sixty times moreCO2 emissions than an e-mail, or 240g per recipient. However, while this calculation certainly makes sense on a per unit basis, a number of parameters are not taken into account, such as whether the paper can be recycled (which is the case for paper used in direct mail in over 60% of cases).

On the other hand, the trees saved by recycling paper compensate for part of the emissions by absorbing carbon dioxide.

2 searches on Google release 14 grams ofCO2 into the atmosphere, which is as much as heating a cup of tea (calculation by physicist Alex Wissner-Gross (Harvard) which does not take into account the environmental degradation and energy spent to create and recycle Google's servers).

65 emails emit as much as one kilometre by car.

The carbon footprint of spam in a year is equivalent to 3 million cars burning 7.5 billion litres of fuel (McAfee report "The Carbon Footprint of Spam").

17 million tons ofCO2 are emitted each year for sending and filtering spam (80% of the emails in circulation).

Making SMS an "eco-responsible" asset for your company

The impact of your communication actions can be the subject of awareness. Fortunately, it is possible to opt for eco-responsible solutions that will benefit your company on many levels. If you want to initiate a greener communication, here are the 7 good reasons to use SMS!

Indeed, the agency for ecological transition recommends SMS to overcome the "all paper" logic and to distribute its promotional offers in a more ecological way.

Start at the beginning and with concrete actions that can be launched quickly. Since SMS campaigns are as easy or even easier to set up than most other communication channels, it is within everyone's reach and a good reason to take the plunge.

A (first) step in eco-communication with considerable effects.

By choosing to send SMS, your commitment to the planet is real and immediate. Choosing to switch from an email campaign to an SMS campaign means reducing your carbon emissions by almost 5 tonnes for every 100,000 messages sent... the equivalent of 26,000 km by car!

No compromise on efficiency and performance.

SMS has a 95% open rate within 3 minutes of receipt, is a very personal way to reach your customers and is a perfect tool for relaying your communications.

Faced with increasingly demanding customers and prospects in terms of commitments to sustainable development, the promotion of the ecological approaches you have adopted will enable you to be more in tune with current global issues and to differentiate yourself from your competitors.

An environmentally friendly medium that does not necessarily cost much more.

It is true that an email campaign costs less to send. But if you compare the cost per message opened and per person reached, the gap narrows considerably. In fact, with only 20% of the messages sent being opened (compared to 95% for SMS), the cost of an emailing is almost five times higher!

Communication at the heart of the CSR (Corporate Social Responsibility) approach

Eco-design and the choice of communication media based on limiting the impact on the environment are part of the 3 pillars of the CSR approach for marketing and communication professions defined by ADEME.

We are convinced that responsible communication is the communication of tomorrow. It is a fundamental trend, a key issue for the years to come. With its 160 characters, SMS remains the surest way to reduce your company's digital carbon footprint, to show your ecological commitment and... to make communication rhyme with ecology! 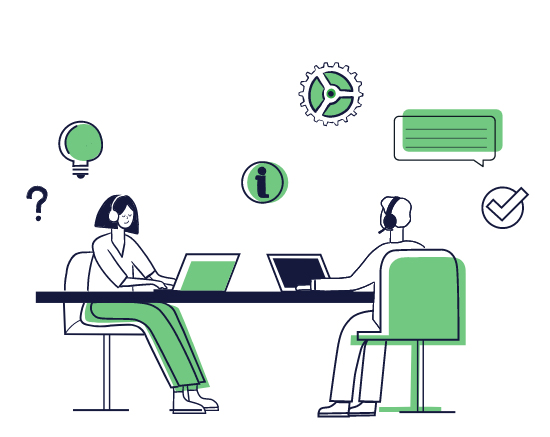 Our team advises you

Are you interested in our services? Our account managers and our technical team are at your disposal to answer all your questions about our SMS solutions and to give you advice on how to set up a campaign.